Skip to content
Hospitality on Lake Como in the past: The Grand Tour & Stendhal

Hospitality on Lake Como in the past: The Grand Tour & Stendhal

Hospitality on Lake Como goes back in time during the period of the Grand Tour, when Lake Como was one of the most visited places by all the nobles and intellectuals of the time. The Grand Tour was a trip to historical and artistic places, where a person could get to know and appreciate them thanks to direct and tangible experience, instead of just studying in books. From the 17th century, young people from the wealthiest European families could finish their studies by visiting cultural, artistic and political centers in Europe. Italy was one of the favorite destinations, not only because of its rich history and architectonical treasures but also because these nobles could purchase art objects as a souvenir to bring back home.

It is from the Grand Tour onwards, that the tourism industry develops: in fact, the first guides are published with the Italian landscapes and places to visit. Also, Lake Como becomes one of the most visited places during the Grand Tour, thanks to its strange shape and its unique landscape, which fascinated many travelers. Lake Como becomes during the 18th and 19th century a fashionable destination to visit, well appreciated for its healthy air and for the exotic climate, not to miss before going back to the North. Staying on Lake Como means enjoying the climate and the landscape, which inspired many artists such as Plinio. All the art objects such as vases, statues, olive trees, and cypresses made Lake Como an example of classical beauty. After the Grand Tour period, luxury villas were built together with amazing gardens and parks, home for the rich families and famous guests coming from all over Europe.
It is interesting to look at the past in order to understand the present: in this way we have different perspectives thanks to witnesses of famous artists such as Stendhal.

It was this author, in fact, who described Lake Como as something sublime. He loved the romantic beauty of the lake, especially villa d’Este in Cernobbio, which was owned by the princess of Wales; villa Pliniana in Torno, which reminds him of the Scotland lakes as the mountains are very steep and go suddenly into the lake. Stendhal describes the mountains which surround Lake Como is full of chestnut trees with picturesque villages situated on the coast. Here according to him, the sound of the churches’ bells is sweetened with the light lake’s waves. Villa Melzi, Villa Serbelloni, and Villa Carlotta were the other villas visited by him. He was fascinated by the lake and all the villas during the summer of 1817.

From all these witnesses, we can conclude that hospitality on Lake Como has its roots in the past: it was thanks to the intellectuals and nobles coming from Northern Europe who appreciated the warm climate and the beauties of the lake, that tourism developed. Of course, writers such as Stendhal contributed to the fascination of the place by enhancing it in their books and attracted many tourists to Como. As the Italian writer Brilli says, the unique attraction of Lake Como, which differentiates it from other lakes in Italy, is that there is a mix of mountains and lake: the combination of an alpine scenery with the sweet and romantic lake attracts people from all over the world. 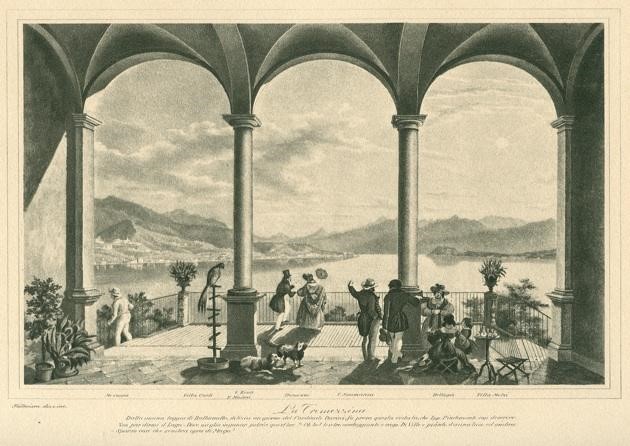