Skip to content
Discovering the History of Menaggio, town on Lake Como

Discovering the History of Menaggio, a town on Lake Como

Menaggio is a town situated in the Province of Como, Lombardy. It is located on the western shore of Lake Como, at the beginning of a valley that connects the town to Lake Lugano. Thanks to its position, Menaggio is a lively town in Italy, which offers many typical places to eat and drink, in addition to the wonderful view of Lake Como. Indeed, starting from the central Piazza Garibaldi, the town is scattered with cafés and restaurants and enriched with a unique and relaxing lakeside. Menaggio is also an interesting place to visit in Italy thanks to its History that can be discovered simply walking through the city centre, the three hamlets of Loveno, Nobiallo and Croce, and the nearby area.

The High society’s favourite ancient Villas and Hotels during the stay in the area.

The History of Menaggio began hundreds of years ago, but only when the advantages of its location and mild climate were discovered by the first vacationers some of the main tourist attractions of the town, like hotel Victoria, Grand Hotel Menaggio and Villa Mylius Vigoni in the fraction of Loveno, were built. Besides its small size, the hamlet of Loveno was a popular stop for artists and members of the high society, who, during their journeys, loved to spend the summer in the luxurious villas of Loveno. Today Villa Mylius Vigoni, a property of the Federal German Republic and the seat of the German-Italian cultural foundation, is often chosen to host high-level meetings. The villa is surrounded by a huge park designed by architect Giuseppe Balzaretto and can be visited on the reservation. The fraction of Loveno also hosts Villa Garovaglia Ricci, which stands in front of Villa Vigoni and is the seat of the offices of the cultural foundation. In the lower area of Loveno, you can also visit Villa Belfaggio, Villa Bolza and the parish church of SS. Lorenzo and Agnese.

The History of Menaggio can also be found in the many Romans ruins, that can be seen especially in the area of Nobiallo and Croce. Indeed, the parish church of Saints Bartolomeo and Nicolao, characterized by the Romanesque leaning bell tower which dates back to the 13th century, can be visited in Nobiallo, also crossed by the Antica Strada Regina, an ancient road built by the Romans and still accessible by feet. Instead, the famous belvedere “la Crocetta”, with its rests of the defence line of the First World War, can be found in the area of Croce.

Other remains can be found hiking above the town of Menaggio, as many present hiking itineraries retrace ancient trade and travel routes. Along the way, you can easily find old stone buildings in various stages of ruin, one of the most famous is Rifugio Menaggio, located at 1400m altitude.

However, one of the most important historical attraction in the area of Menaggio is the Castle of Menaggio, located on a hill behind the town. The castle dates to the 10th Century and it still preserves parts of the perimetral walls, the entrance and some ruins of two towers. Thanks to the boundaries represented by the stream Sanagra and the proximity to Lake Como, the Castle of Menaggio took advantages from its strategic position. In fact, it was probably built on an earlier Roman fort, fortified in order to withstand the incursion of the Hungarians. Through the years, the castle was subjected to many attacks and conquered by different owners, until the Church of Saint Carlo was built on its ruins, in 1614. 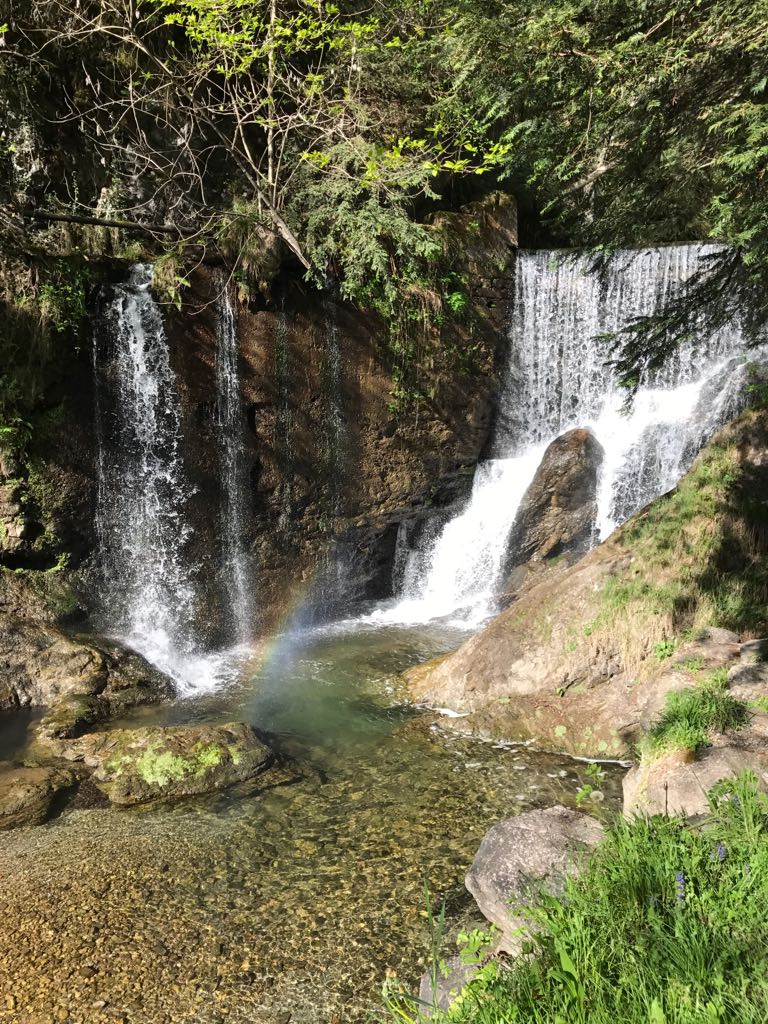 Along with one of the ways to reach the Castle of Menaggio you can meet a beautiful waterfall. I pictured it one morning when I was walking up to Hotel Loveno.

Discover the most important historical sites on Lake Como, following the historical itinerary in Menaggio.

If you are passionate in History, you can discover by yourself all the monuments, remains and historical sites that recall the importance of Menaggio through ages. The official historical itinerary starts in the central Piazza Garibaldi and begins taking Via Calvi. Halfway up the street on the right, you find the first historical monument of the tour, the Church of St. Marta, which shows interesting paintings from the 17th Century. At the end of the street, you can find the parish church of St. Stefano with three naves covered with frescoes by the local artist Tagliaferri, since 1899. The altar is surrounded by a copper medallion depicting scenes from Virgin Mary’s life and enriched with sculptures of the 17th Century by the “maestri intelvesi”, a group of sculptors and craftsmen of the Val d’Intelvi who, generation after generation, worked all around Europe. Coming out of the church, you should turn right in Via Caronti, then at the end of the street turn right in Via Leoni and finally turn left into Via Castellino da Castello.

This street, characterized by beautiful portals, leads you to the upper part of the town, where the castle once was and the houses follow its original perimeters. Above the ruins of the ancient castle, you can find St. Carlo’s Church built in 1614 during the period of Spanish domination. Its bell tower has, in fact, a characteristic Spanish style that can be seen from the centre of the town.

The tour continues on the left, taking Via N. Sauro and then the road that runs just below the walls of the castle, until the beginning of Via Fabbri where, on top an of a gate, you can find a sculpture which dates back to the 12th Century and represents the head of the bull of San Luca. Walking down the street you can also see a fountain called “Del Salvatore” and above it, a bust in relief, unfortunately, damaged by time.

At the end of Via Fabbri, you should take again Via Castellino da Castello, walk down for about 10 minutes and then turn left to Via Strecioum. At the end of the street, you can find the most picturesque bridges over river Senagra, characterized by a relief by Vannuccini dating back to 1965, and the chapel dedicated to the Madonna di Caravaggio. Now you should turn left into Via Loveno and left again into Via Leoni, until the end of the street, when you pass in front of the little church of S. Rocco, built-in 1772. Then pick up via Roma, that leads you to the entrance of the Lido of Menaggio, built-in 1934 and characterized by its big beach and swimming pool.

The walk now continues through Lungolago Benedetto Castelli, where you find a monument by Francesco Somaini, made of Carrara marble and dedicated to the silk weavers of Como. It represents, in fact, a hymn to the weaving culture of the place, a centuries-old tradition that made Como one of the silk capitals of the world. Now you can continue your tour following the lakeside promenade and enjoying the view until you pass in front of the Grand Hotel Victoria, built-in 1885, and then find yourself back in Piazza Garibaldi. More details on the historical itinerary in Menaggio. 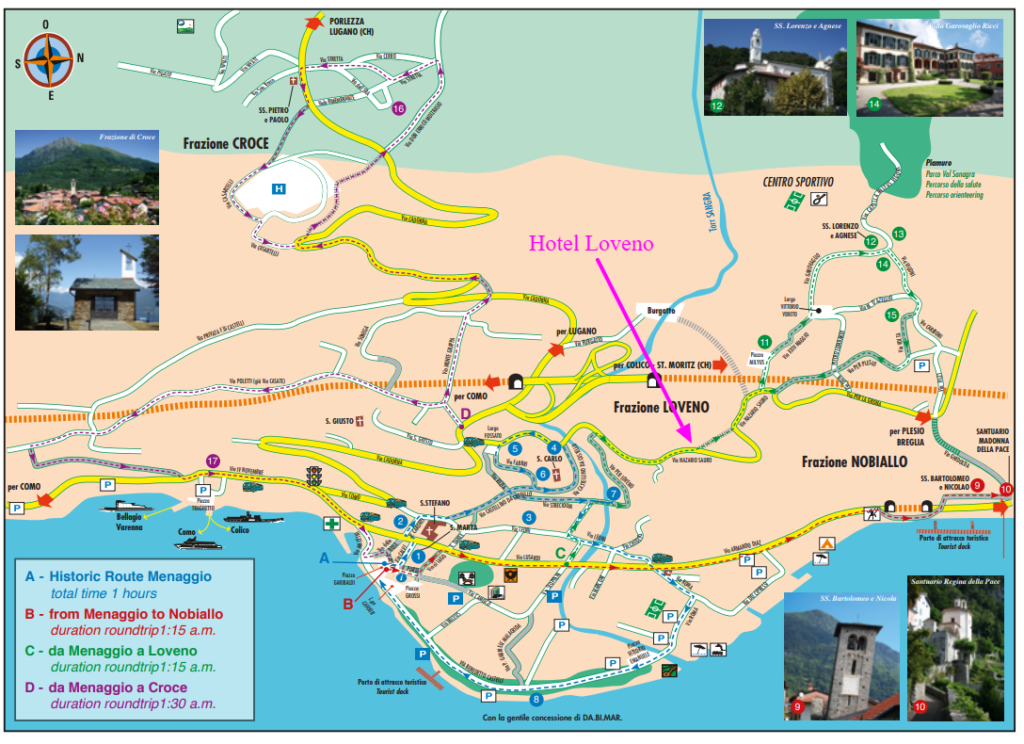 Map of Menaggio BY INFO POINT and personalized by Hotel Loveno.  To download the map, click here.

Events, shows and transport, how to move and reach us in Menaggio.

Menaggio is one of the most popular towns of Lake Como area, accessible with ferry and characterized by typical patisseries and restaurants. The town of Menaggio, like all the surrounding areas of Lake Como, is always full of life, activities and events. Every Spring and Summer you can choose between firework shows, musical and gastronomic festivals, craft markets, fashion shows and sports tournaments. So, besides its historical interest, Menaggio represents a great place to spend your holidays, as well as an easy point to reach. From the city centre, it is also very easy to reach our Hotel Loveno, among the cosiest Menaggio hotels where to live relaxing moments admiring the splendour of the lake!

Lake Como among kitesurfing, paddle, and other thrilling water sports and activities

Lake Como among kitesurfing, paddle, and other thrilling [...]

Searching for new things to do on Lake Como? Discover its surroundings and get to Rescia Caves on Lake Lugano!

Searching for new things to do on Lake [...]

Lake Como and its infinite experiences: sights to see, places to live and activities all in one place! Let’s go to Orrido di Bellano!

Lake Como and its infinite experiences: sights to [...]

Looking for exciting things to do on Lake Como? Do you love food and wine? So…take note!

Looking for exciting things to do on Lake [...]

Here at Hotel Loveno we really care about our [...]